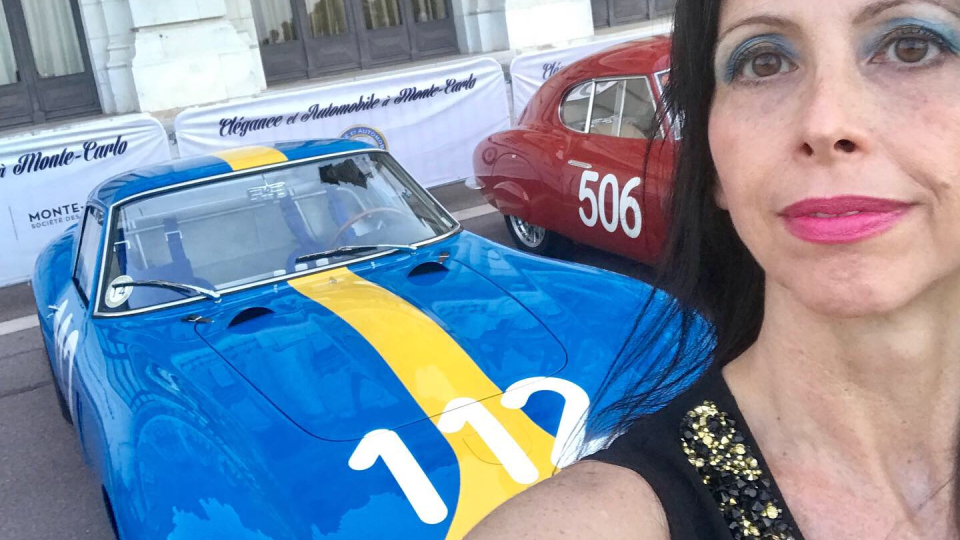 In fact this exceptional event has just taken place, last week in the Principality.

It was organised by the Automobile Club of Monaco, that fine institution that puts on the Formula 1 Grand Prix and the Historic Grand Prix as well as the Monte-Carlo Rally, with the participation of SBM, which manages the most significant venues.

Four days during which the most exceptional vehicles in the world paraded through the Principality. A catwalk that linked the greatest automobile designers with fashion designers. A combination that has always been what dreams are made of!

On the judging panel the Monegasque ballet star, actress and singer, Lorena Baricalla, who as a performer and connoisseur of the elegance inherent in her profession, knew how to embrace all the innate beauty of these four-wheeled works of art, participating in the event with passion and enthusiasm.

With her on the panel of judges were its chairwoman, Sandra Button, organiser of the well known Pebble Beach Concours d’Elegance in California; Lorenzo Ramaciotti, former Chief of Design at Pininfarina and Thierry Boutsen, former F1 racing driver.

Owners arrived with their cars from all over the world: not only from Europe but also from America and as far away as Australia. A prestigious line up that showed off these automobile jewels in the ideal setting of the Principality of Monaco.

Lorena Baricalla, what did these four days mean for you?

LB: They were four absolutely fantastic days! I saw cars that are unique in the world and I shared my passion for the automobile world. Being from Monaco, I grew up on the F1 circuit. As well, I’m Master of Ceremonies for the World Sports Legends Award where I welcome the greatest champions in the sector, from Mika Hakkinen, Jackie Icks, Jutta Kleinschmidt and Michèle Mouton to Charles Leclerc, Antonio Giovinazzi and Stépane Richelmi, without forgetting Bianca Senna, niece of the legendary driver, who accepted the Posthumous Award on his behalf.

What was the event programme?

LB: The first and second day, as one of the judges, I saw all the vehicles and spoke to their owners. It was really touching to see how emotional they were when each of them spoke about their car. A lot of love goes into the desire to safeguard these masterpieces of design and mechanics, each one of which has played a part in an era of automobile history.
Instead, on the third day, a great public parade of the cars was organised in the perfect setting of Place du Casino (Casino Square).

Most of the owners had chosen outfits in keeping with the era and style of their vehicle. I was able to admire the vehicles in movement from the Hotel de Paris Louis XV Terrace where the judges were seated.

The fourth day  ended with the prizes being awarded in front of the Prince’s Palace where Princess Charlène presented the prizes to the winners.

As well, we had gala dinners and lunches in Monte Carlo’s most beautiful places. The spirit of the event was truly passionate and I met some really lovely people.

What criteria did the judges use to choose the winners?
LB: Actually, each of these 50 magnificent cars was unique in its model and age and deserved to win. Unfortunately choices had to be made to elect a winner in each of the 9 categories, with the addition of a Special Prize. The focal point was a question that the owners were asked: “If your car could speak, what would it tell us?”

The criteria were mainly based on design elegance, the vehicle’s history, its rarity, the state of preservation of its original fittings…

Personally, I’m very sentitive to lines, with a preference for rounded shapes, and colours that enhance the bodywork.

Lines create movement and a car continues to pulsate, even when it’s standing still.

Which models did you fall in love with in particular?

LB:  I was particularly struck by a luminous blue, 1939 Talbot Lago that perfectly combined an elegant character with sporting lines: its powerful motor meant that even in those days, it could reach 180 kilometres an hour!

I also really appreciated a splendid 1928 Maserati Spyder sports car which radiated speed and ‘aggressiveness’. The owner is an Italian-American from New York. He has over a hundred cars in his collection and invited me to visit it.

A more recent vehicle was the fantastic prototype for the Ferrari Mythos, designed by Pininfarina and owned by a Japanese collector. Other beauties were a 1962 Ferrari GTO worth 68 million euro and owned by an American; a  light blue 1954 Pegaso convertible that really epitomises the ‘dolce vita’ on the Cote d’Azur, and a black 1937 Alfa Romeo coupe  – 1 of only 6 in the world…

Then there was an incredible metalic grey 1936 Stout pullman, inspired by a scarab beetle and gifted to De Gaulle by Eisenhower, as well as  the Rolls Royce in which Grace Kelly and Ranier of Monaco rode on their wedding day – a car linked to the history of the Principality and today property of an American collector who owns 200 cars, including 25 historical Ferrari racing cars.

Lastly, it’s impossible not to mention a 1965 Lamborghini owned by an American collector: a ‘galactic’ 1996 McLaren; the oldest car in the contest, a 1914 Mercedes Phaeton functioning perfectly and in its original condition, as well as the futuristic Lancia Stratus which won the Special Prize with recognition also going to the youngest collector. Collecting is a passion thanks to which these jewels can be maintained.

An event dedicated to this level of elegance needs a particularly glamorous outfit.

Lorena Baricalla is considered a fashion icon so she has very close ties to the fashion world. Each of the 8 different moments during the 4-day event called for an outfit in keeping with the time of day and the situation.

For the opening evening on the Casino Terrace, Lorena Baricalla chose a long dress by Eles Italia of Stefania and Silvia Loriga, a youthful brand, whose garments are none-the-less exquisite. Lorena Baricalla’s dress had a long, transparent skirt in an intense blue.

Raquel Balencia, Milan, creator of garments handmade in Italy, designed a long, heavenly, chiffon gown patterned with roses for the candle-light dinner at the Grill, Hotel de Paris; a floral chiffon dress with a long slit for lunch right on the shore at Vigie at Monte Carlo Beach Hotel; a short, black tulle dress with appliqued  roses for the Prize Giving Ceremony at the Royal Palace.

Instead, Agnes Wuyam, a Polish fashion designer based in France, dressed her in a long red gown for the Automobile Parade in Place du Casino, and in a silver evening gown with train for the Gala Dinner in the magnificent private venue in the Monte Carlo Casino.

“Elegance and Automobile Monte Carlo” is certainly the most prestigious event of the Monegasque summer!